ELTEN ERGO-ACTIVE: the right shoe for every type of foot 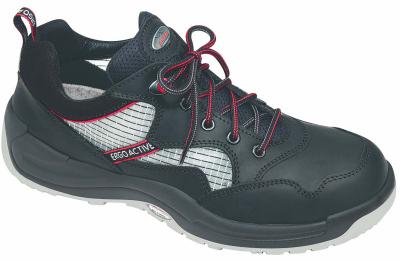 This is something new on the market: a shoe series which offers the right shoe for every type of foot. Which provides optimum cushioning for every weight. Which is geared to the characteristic sequences of movement in today's world of work. And which treads new, innovative ground in climate control. ELTEN presents these shoes exclusively for A+A 2005: ELTEN ERGO-ACTIVE the new dimension in wearing comfort.

As technology leader in its field ELTEN with its new ERGO-ACTIVE shoe series is once again setting new standards in the safety shoe market. Because behind the name ELTEN is a complete comfort and safety concept comprising four innovative features. The first is a new form-fit system for each type of foot and based on the latest scien-tific findings. The second is a new kind of full-surface insole with cushioning which adjusts to weight. The third is an innovative outer sole concept and the fourth a newly conceived climate control inside the shoe.

1. Form-fit - virtually made to measure

In the ERGO-ACTIVE shoe series ELTEN has now developed a form-fit system which offers the right shoe for every type of foot. The innovation: ELTEN's form-fit system takes into consideration not only foot length and width but also many other parame-ters. The decisive factor behind this was new scientific findings: in a large-scale field study by the University of Tübingen 1,000 feet were measured with a 3D scanner and over 25,000 individual data gathered, thus enabling a far more differentiated type classification of the different foot forms than hitherto. Thus, as well as the width of the ball and heel and the length of the foot and toe, the ELTEN foot type system also takes into consideration the angular position of the ball of the foot and thus offers the greatest possible individuality in wearing comfort.

This new range of forms sets new standards in comfort: it offers the wearer a hitherto unknown freedom of movement in the toe area and optimum bedding down of the foot in the shoe. Initial wearing tests confirm that the ELTEN ERGO-ACTIVE series gi-ves a totally new wearing sensation - wellness for the feet.

Innovation number three: the innovative ELTEN outer sole concept, which is the first to be geared to the characteristic movement sequences in today's world of work. Likewise this technology is based on new findings about the forms of movement oc-curing in today's working world. Thus, the new outer sole concept for the first time takes into consideration that under industrial production conditions of today turning and standing movements in the work place in particular are considerably increasing. ELTEN has accordingly developed a sole concept which supports these turning movements. The four pivot points on the outer sole - two on the outer midfoot bones and two in the heel zone - reduce frictional resistances in the turning movement to a minimum and so prevent the feet from becoming rapidly tired.

Feature number four: the new-style microfibre inner lining enables a substantially im-proved transfer of moisture to the outside. The 3D structure of the new textile tech-nology not only acts as a thermal insulation, it also produces a pumping action while walking so that permanent air circulation takes place inside the shoe. As a result high thermal comfort and at the same time a high breathability can be guaranteed.

However, the special design of the ERGO-ACTIVE series goes one step further. Be-cause the maintenance of a healthy foot climate is not only seen as the job of a high-ly effective inner lining but as a requirement of the entire shoe. Already the design of the form-fit and the leg were looked at from the point of view of the foot climate in order to give the foot as much room as possible to breathe and still assure a firm seating in the shoe. Accordingly, a great deal of importance was placed on toe free-dom in the shoe in order to eliminate friction points where heat and moisture might be generated. In short an integrated approach to the climate problem which ultimately makes no more compromises.

The trade can prepare to be surprised: after the launch of the ELTEN ERGO-ACTIVE shoe series the whole concept of wearing comfort in the case of safety shoes may have to be redefined. By the by, those who would like to find out the comfortable way, should visit the ELTEN fair stand at A+A Düsseldorf, Hall 1, Stand A01/A03.