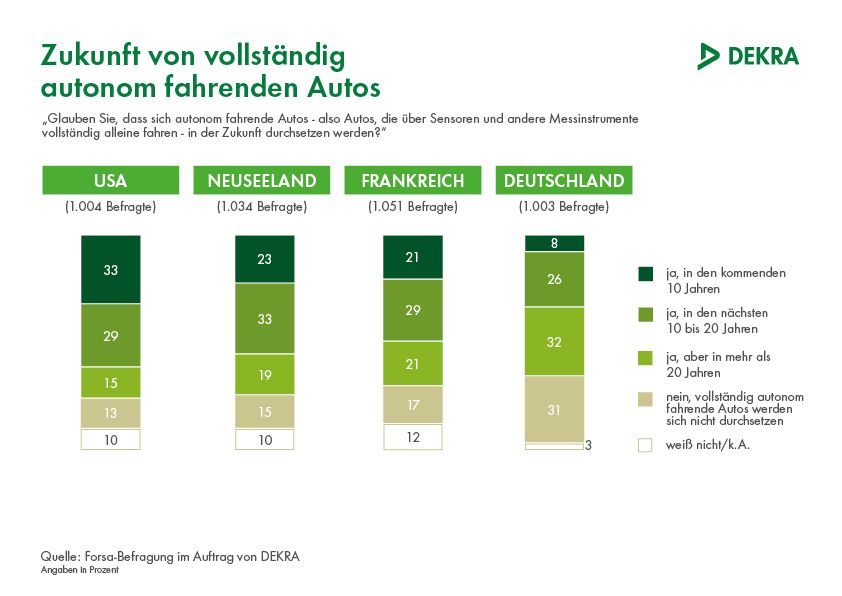 Germans are noticeably more skeptical than people from other countries when it comes to autonomous self-driving cars. However, Germany is the most optimistic country concerning the gain in safety through automation.This is the outcome of an international Forsa survey on behalf of the expert organization DEKRA.

According to the Forsa survey, only 8% of respondents in Germany believe that fully autonomous cars will catch on within the next ten years. 32% estimate that it will take more than 20 years, while a further 31% even believe that fully autonomous cars will not become an established concept at all. Among the other countries that took part in the survey – France (21%), New Zealand (23%) and the USA (33%) – a much greater number of respondents expect autonomous cars to experience their breakthrough by 2025.

In all four countries, a significant majority think that the increasing level of automation in cars will bring in general about an increase in safety. In Germany, almost half (49%) envisage major safety gains. Only a slim minority (5-9%) in all countries believe that automation will not lead to safety increases at all.

Drivers in all of the countries included in the survey expect blind spot assist systems to enhance safety most of all. In all countries, it was most commonly listed among the three systems with the greatest relevance to safety, with the percentage of respondents somewhere between 57% and 65% depending on the country. This masks a number of considerable differences between the countries. Whereas lane keeping assist, for example, is rated as extremely relevant to safety in both the USA (41%) and New Zealand (39%), it plays a less important role for respondents in France (29%) and Germany (24%). Europeans consider active brake assist to be a more important safety feature, for instance (Germany 54%, France 47%).

According to the results of the survey, the outlook for the acceptance of driver assistance systems and automated solutions is relatively good in the four countries concerned. In general, a minority of just 3% and 6% would not like any electronic assistance at all in their own cars.

"Driver assistance systems and the increasing automation of driving have the potential to help make mobility safer for all," says Stefan Kölbl, Chairman of the DEKRA e.V. and DEKRA SE Management Boards. "It is also unprotected road users such as pedestrians and cyclists, children and senior citizens that will especially benefit from this."

However, when it comes to the future of autonomous driving, the DEKRA experts are also drawing attention to the challenges that are yet to be overcome. "Vehicle technology itself is not the crucial factor. After all, a number of manufacturers have already proven that vehicles are technically capable of driving autonomously. The real challenges lie more in the framework conditions," notes the DEKRA CEO. "We need a set of very clear standards, regulations and controls in this respect."

From the perspective of the DEKRA experts, this includes both issues of liability and the matter of digital security against manipulation. Another important issue is the testability of the safety-relevant electronic systems and functions. "When the vehicle takes control, the risk is transferred from the driver to the systems," states Dr. Gerd Neumann, Chairman of the Management Board of DEKRA Automobil GmbH. "This makes it all the more fundamental that these systems function continuously and reliably – and of course these aspects must be tested as well as part of a general inspection. This is why inspectors require access above all to necessary data providing information about functional reliability."