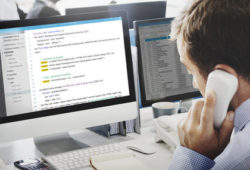 Office work is diverse and although widely regarded as low risk environments, the large (and growing) proportion of employees within the EU who work in office environments means that a significant number of workers are potentially exposed to any risks to their health that might arise.

Office work is diverse, with jobs ranging from those that demand a high level of skill and knowledge (for example journalists and financial administrators), to those where the worker has little control over their work or the organisation of their working day, such as call centre and data processing work. Although widely regarded as low risk environments, the large (and growing) proportion of employees within the EU who work in office environments means that a significant number of workers are potentially exposed to any risks to their health that might arise.

In the modern office much of the focus in terms of risks to health relate to the use of computers in some form. However, it is important to recognise that computers are not the only potential source of risk. Some health problems arise from the essentially sedentary nature of many office-based jobs (regardless of whether a computer is used or not); while documents and papers can be heavy (especially in bulk) and might lead to manual handling risks (especially when combined with sustained sitting and a general lack of movement).

Many office jobs have become increasingly dependent on the use of computers, or would not exist in their current form without the advent of such computer systems. Computers have almost entirely replaced typewriters for any work involving the production or editing of text (reports, letters, etc.) and have transformed communication systems through developments such as email and instant messaging.

As well as transforming how text and other material are produced, this has also transformed jobs. Thus few organisations still have the equivalent of a dedicated typing pool where staff specifically trained in ‘keyboard work’ carried out their work. Instead, staff primarily employed for other forms of expertise are usually required to carry such tasks out themselves.

In a further technological development, the advent of portable systems such as laptops and, in more recent years, smartphones and tablets, has created additional changes, not only to the physical manner in which such devices are used but also in where they are used, moving ‘computer work’ out of the office and into the café, hotel, train, home and many other locations. Increasing concerns have been expressed that such changes are leading to a blurring of the distinction between work and non-work with potentially negative impacts on ‘work-life balance’. Even with more conventional computers, technological developments mean that an employee no longer needs to be in a centralised physical office and the development of ‘telework’ allows employees to work in remote locations (including their home). Teleworking provides a variety of new challenges, not just in terms of communication and how such work is organised but working away from centralised, controlled premises makes it more difficult for the employer to ensure that the teleworker is provided with a safe and healthy workplace in which to work.

In an additional complication, the increasing use of computing technologies in the office has been paralleled with a growth in their use at home. Starting with ‘home computers’ this has now extended to many of the same array of smart devices as used in working environments.

This has had two major consequences. Firstly, it has increased the extent of ‘exposure’ of individuals to some of the physical risks associated with the use of these technologies and secondly, this development has led to some authorities seeking to absolve employers from any adverse consequences because of the problem of attribution of any problems (especially musculoskeletal problems) to work rather than home use.

A new OSHwiki article highlights the risks and hazards facing office workers and categorises them into four major groups depending on their nature: postural problems, psychosocial factors, environment and the ones linked to intensity and design of the office.

Furthermore, the author includes concrete recommendations that can help to deal with, and to reduce risks and hazards at the office, such as the development of an organisational strategy and the conduction of risks assessments. A significant part of the article is dedicated to ergonomics good practices. Written by Dr Richard Graveling from the Institute of Occupational Medicine in Edinburgh, and based on an EU-OSHA e-fact, the article also informs about the existing EU legislation.
To the OSHwiki article