Fraunhofer study confirms influence of humidity on health and performance 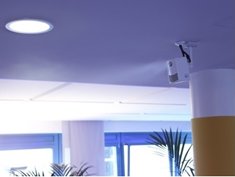 Humidifiers have a positive effect on performance and health

In a 2-year study, the Fraunhofer Institute for Industrial Engineering IAO examined the importance and the effect of humidity at the office workplace. The results show that employees in offices with or without humidification suffer in varying degrees from disorders and symptoms of dry air.

Next to room acoustics and lighting, the indoor climate is one of the working environment factors that can have a direct impact on well-being, performance and health. The room climate is mainly determined by the relative humidity and the room temperature. One third of office workers consider the humidity in the workplace as the main source of disturbance (see SBIB study, Lucerne (2010)). Nevertheless, there are no binding legal requirements or standard values for humidity in office buildings yet. Therefore, the Fraunhofer IAO together with the DRAABE Industrietechnik GmbH investigated the effects of the air humidity at the office workplace in the joint research project "Office 21®".

The tests were performed in the Workspace Innovation Lab at the Center for Virtual Engineering ZVE of the Fraunhofer IAO and were additionally supported by a web-based survey. In a closed office space, three direct-room humidifiers (DRAABE NanoFog Evolution) were used to regulate the room's air humidity. Within four study periods, the direct-room humidification in the examination room was turned on and off for several weeks. The scientists compared the survey results for humidification "on" and "off" with other areas in the building without humidification.

As expected, the results show great differences in the scenarios concerning the perception of humidity: With active humidification, none of the interviewed agreed that the humidity was often perceived as being too low. However, when the humidifier was not active, 44 percent affirmed that question. The average increase in relative humidity from 28.5 percent to 38.5 percent resulted in a positive perception by the office workers: 54 percent of the interviewed found the direct humidifiers very refreshing. Only 33 percent made that statement when the direct-room humidification was inactive.

As office work today always includes working at a computer monitor, the potential eyestrain is considered an important factor for a person's ability to concentrate and perform well. The survey for symptoms of "burning eyes" shows clear differences between the office spaces with resp. without humidification: 41 percent of the respondents in offices without air humidification confirm that they often have burning eyes at work. When humidification was in operation, the symptoms were reduced by almost half. Only 23 percent of the surveyed office workers then frequently suffer from burning.

The mucous membranes of of the respiratory tract (nose, bronchi, lungs) fulfill an important protective and self-cleaning function. The viscosity of the mucous membranes is crucial as to how quickly germs are transported out of the body. The faster this occurs, the lower the risk of disease. Clinical studies support the statement that the air humidity affects the viscosity of the mucous membranes. Just like with the question about burning eyes, the interviewed show different approvals in the survey groups: 54 percent of employees in offices without air humidification agree with the statement that they have often parched airways at work. At workplaces with humidification, the complaints about parched airways were reduced by over a third to 35 percent.

Especially for professionals who need to speak a lot, the permanent use of the voice increases the risk of developing voice disorders. For example, about 60 percent of call center employees frequently suffer from vocal strain. Common symptoms include dryness in the throat and larynx, swallowing coercion, increased coughing and hoarseness. The survey shows a clear tendency that low humidity can increase voice problems. In environments without humidification almost a third (29 percent) of the workers often have problems with their voice. In contrast, if the air is moistened continuously, only 18 percent complain about frequent voice problems.

The Fraunhofer study shows that office workers in areas with and without humidification show different degrees of suffering from the described symptoms. The study confirmed an influence of air humidity to possible eye irritation, dryness of the mucous membranes and on possible voice problems. For all queried symptoms, respondents in offices with an additional direct-room humidification express fewer complaints. The humidity in the workplace has to be assessed as an important means for increasing the well-being and for the potential reduction of health risks. The Fraunhofer IAO also sees it confirmed that the additional use of humidification has a positive effect on the appreciation of the workplace and as well as on the performance and health of office workers.

You can request a free 24-page executive summary of the study by e-mail to dominic.giesel@draabe.de.