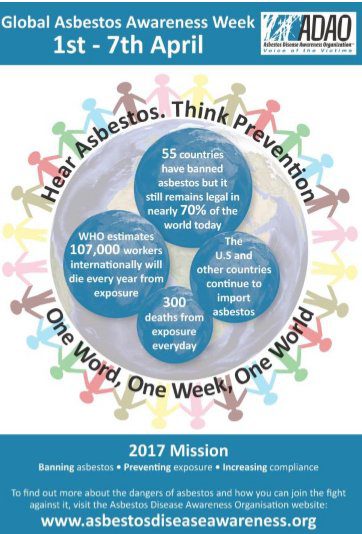 This year’s campaign for a global asbestos ban will translate across six different languages, spreading the message to a wide international audience

Asbestos is a known carcinogen and there is no safe level of exposure. Since the 19th century, asbestos was widely used in construction, shipbuilding, and the automotive industry. Without a ban, asbestos remains legal and lethal in the USA and in an estimated 70% of countries around the world.

Global Asbestos Awareness Week is dedicated to awareness and prevention, with each day featuring educational resources from leading organizations, guest blogs, videos, and asbestos victims’ stories. The week culminates on April 7th with an online candlelight vigil. We are excited to bring our educational messages to an even wider global audience by collaborating with The McOnie Agency, a U.K. based public relations firm. By partnering with the McOnie Agency, our 2016 GAAW educational materials reached an international audience and this year, we aim to expand upon this awareness.

Building on strength and collaboration, this year’s Global Asbestos Awareness Week will focus on:

1. Banning the mining, manufacturing, and use of asbestos
2. Preventing asbestos exposure
3. Increasing compliance and enforcement of existing laws and regulations
4. Strengthening international partnerships

“It is exciting to see the global embrace and collaboration for Global Asbestos Awareness Week,” stated ADAO Co-founder and President Linda Reinstein. “Since the awareness campaign began over a decade ago, ADAO, along with our partners, has dedicated over 70 days specifically to asbestos awareness. Each day, an estimated 300 people die from asbestos-caused diseases. It is unconscionable that Russia, China, Brazil, and Kazakhstan continue to mine 2 million metric tons of asbestos every year to be used primarily in asbestos-cement products. Even worse — the U.S. and other industrialized countries continue to import asbestos, bringing danger across our borders and contributing to international human rights violations. Millions of tons of asbestos remain in homes, schools, and workplaces. ADAO joins the global community in calling for a ban in the United States and around the world. Enough is enough.”

Since its founding in 2004, ADAO has worked with the U.S. Senate to unanimously pass twelve Asbestos Awareness Week Resolutions and secured five U.S. Surgeon General asbestos warnings in an effort to prevent exposure to eliminate deadly asbestos-caused diseases.

Exposure to asbestos, a human carcinogen, can cause mesothelioma, lung, gastrointestinal, colorectal, laryngeal, and ovarian cancers; as well as non-malignant lung and pleural disorders. The World Health Organization (WHO) estimates that 107,000 workers around the world will die every year of an asbestos-related disease, equaling 300 deaths per day.