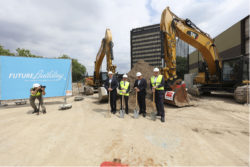 On July 14, 2017 Düsseldorf’s Lord Mayor Thomas Geisel, Chairman of the Supervisory Board of Messe Düsseldorf, Helmut Oberholz, Managing Partner of the commissioned architects’ office slapa oberholz pszczulny sop architekten, Thomas Kleine-Kalmer, division manager of general contractor Köster GmbH and Werner M. Dornscheidt, President and CEO of Messe Düsseldorf GmbH, kicked off one of the most ambitious construction projects in the history of Messe Düsseldorf with the ground-breaking ceremony.

By summer 2019 the company will build not only a new multi-functional hall with conference facilities but also a fully glazed new entrance south complete with a translucent, LED-lit canopy roof and adjacent underground parking. As a result one of the most state-of-the-art and multi-functional trade fair locations and convention venues will come into being in the southern part of the Düsseldorf exhibition centre meeting both the highest architectural and functional standards. The investment in this new Complex South totals EUR 140 million.

“With the start of construction we have taken an important step towards the complete modernisation and renovation of our premises at our homebase; and we continue adapting the exhibition centre to our customers’ demands and requirements thereby increasing our service excellence even further,” delights Werner Dornscheidt and adds: “And as always this is done without any subsidies.” By 2030 Messe Düsseldorf will invest a total of some EUR 636 million in its premises. “With this move Messe Düsseldorf secures its position as one of the leading trade fair companies worldwide and as the most profitable trade fair organiser with its own premises in Europe,” says Lord Mayor Thomas Geisel commenting on the construction project and goes on to say: “Messe Düsseldorf is a key economic factor for Düsseldorf – investment in its future benefits the whole region.”

South Entrance: a New Face to the City

Helmut Oberholz, Managing Partner of the commissioned architects slapa oberholz pszczulny architekten, is proud to have also been commissioned with the new Complex South after completing the extension of the northern part of the exhibition centre in 2004: “The centrepiece of our design is an oversized canopy roof made of translucent fibre glass fabric measuring 7,800m² and installed 20 metres above ground to mark the new entrance. We are extremely pleased to be able to create a landmark for this unique location between the River Rhine and Nordpark while giving the exhibition centre a new face to the city visible from afar.”

The translucent, illuminated canopy welcomes trade fair and convention visitors alike and serves a number of purposes such as taxi lanes, local public transport stops and access to its underground parking. From here trade fair visitors will cross the entrance portal to enter the 16.5 m high, transparent foyer. Opening up to the forecourt via an all-glass façade spanning over 82 metres, the foyer doubles as a venue in itself. The cantilevered, glazed conference room on the upper floor that protrudes into this atrium-like entrance concourse creates an exciting spatial structure. Additionally, there are over 2,000 square metres of space available for such necessary services as ticket offices or cloakrooms.

From the new south entrance visitors can enter the new hall 1 right away. Boasting a length of 158 metres, a width of 77 metres and more than 12,000 square metres of space without supports, its layout roughly corresponds to that of Halls 8 a and b, offering a total of 558 square metres more space than the two old halls 1 and 2 together. In terms of technical features and its enormous flexibility the new hall lives up to both exhibitors’ and visitors’ highest demands while meeting the high standards of the exhibition centre as a whole. The first floor of the hall will house a new conference area with 6 convention rooms, which can be divided up and flexibly adjusted in size to the various required purposes. A transparent bridge connects the first floor with the existing Congress Center.

“Assignments of this magnitude, where up to 500 workers will be simultaneously busy at the construction site during the peak phase of the interior work, are not uncommon for us but prove a challenge for us time and again,” explains Thomas Kleine-Kalmer, at the ground-breaking ceremony who is Division Manager at general contractor Köster GmbH, based in Osnabrück. “We are happy to have been awarded this project so important for Düsseldorf’s cityscape and be able to jointly shape the future of Messe Düsseldorf.”

Messe Düsseldorf 2030: Strategy for the Future

Apart from energy-efficient building technology, flexible use and adjacent congress facilities are among the most important requirements made on current future-proof exhibition centres today. “Over the past 15 to 20 years the trade fair business has undergone massive changes in the wake of globalisation,” explains trade fair boss Dornscheidt. “Today we operate in a multi-national industry rolling out our exhibition themes worldwide. At the same time, our No. 1 trade fairs here in Düsseldorf have changed in character. They have become places for international knowledge transfer and stakeholder networking – from science and start-ups to multi-national groups. This means that accompanying conferences are also becoming more and more important.”

The Messe Düsseldorf Group of companies has responded to these developments early on with its international strategy ‘Messe Düsseldorf 2030’; it not only places the extension of the global portfolio and strengthening of international sales in the focus of entrepreneurial activities but has also developed a master plan for modernising the exhibition centre that covers all rooms used by customers at the exhibition centre. This master plan kicked off with the building of the new halls 6 and 7 in 2000 and is based on the company’s ongoing assessment of all planned projects in view of customers’ real needs – in keeping with the dictates of efficiency and sustainable development. By autumn 2016 11 out of the 19 halls had already been re-built or completely renovated; as early as 2004 entrance north was entirely revamped to now also feature a direct light rail line to the city centre and Düsseldorf main station. “We have traditionally seen customer focus and service in an integrative manner,” stresses Werner Dornscheidt. The ‘Messe Düsseldorf 2030’ concept therefore considers development of the premises and the portfolio – i.e. the trade fair organiser’s hardware and software – to be equally important.

With a turnover of around EUR 443m in 2016, the Messe Düsseldorf Group maintained its position as one of Germany's most successful trade fair companies. To the tune of 32,100 exhibitors presented their products to 1.6m trade visitors at events in Düsseldorf this year. They were joined by half a million visitors to various conventions. About 50 trade fairs were held in Düsseldorf, including 23 No. 1 events in five areas of expertise: machinery, plants and equipment, retail, skilled crafts and services, medicine and healthcare, fashion and lifestyle, and also leisure. In addition, there were about 70 proprietary, joint and contracted events outside Germany, demonstrating that the Messe Düsseldorf Group is a leading global platform for export. Messe Düsseldorf GmbH is the trade fair company with the highest level of internationalism in capital goods exhibitions. In 2016 Messe Düsseldorf's proprietary events in machinery, plants and equipment attracted approx. 72 per cent international exhibitors and trade visitors from other countries to the Rhine. In all, Düsseldorf trade fairs were attended by customers from about 180 countries. The Group runs a global network of sales offices in 137 countries (74 international representations) as well as centres of expertise in 8 countries.

For about 30 years the architects J.M. Slapa, H. Oberholz and Z. Pszczulny have jointly developed and realised office, commercial, hotel, industrial and residential buildings as well as airports, sports facilities or teaching and research institutes. Based in Düsseldorf with some 90 staff, this architects’ office operates internationally and stands for a clear, timeless architectural language and taking a holistic approach to buildings – down to the smallest detail. With buildings like Gap 15, the Hyatt Hotel at the Media Harbour, Esprit Arena or the new Düsseldorf airport sop architekten has left a mark on the Düsseldorf landscape. The office’s international references include Orjin Maslak in Istanbul or the Euro stadium in Wroclaw.

Köster GmbH is one of the leading construction and civil engineering providers in Germany. Their services range from individual planning to turn-key construction. In close contact with customers holistic, innovative building solutions are realised via a network of 16 branch offices and 15 centres of expertise. Founded in 1938 and headquartered in Osnabrück, Köster GmbH forms part of the Köster Group that operates throughout Germany.


We would appreciate a sample copy of any reprints.