EU Due Diligence Law: Towards social and economic change together

The EU Due Diligence Law: Towards social and economic change together 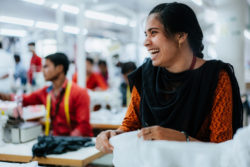 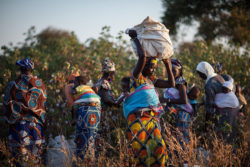 The EU Due Diligence Law is to be adopted soon. It could prove more extensive than the German version because its scope will also include small and medium enterprises if there is a risk of them breaching human or environmental protection rights. The EU legislation rates the textile industry as a risk sector. What does this mean for PPE manufacturers? What role do buyers play?

In Germany the Due Diligence Act is expected to be adopted by parliament even before the summer break. “This is a strong signal for the EU,” says Veronika Ertl, Development Policy officer at the Konrad-Adenauer-Stiftung, and goes on to say: “Germany is not only a strong economic power but also the third EU country after France and the Netherlands to establish a binding tool to identify risks for people and the planet along the supply chain and to sanction non-compliance with due diligence.”

According to a study from 2020, only one in three enterprises in the EU actually complies with its due diligence. However, 70% of the companies polled support EU-wide due diligence legislation. This is why the EU also considered drawing up such urgent legislation. Didier Reynders, the EU Commissioner of Justice in charge, feels that the adoption of the German Due Diligence Act provides tailwinds to this European endeavour. “The more countries join in, the greater the pressure.”

In the EU binding rules are to oblige enterprises to audit their supply chains from the raw material to the ready-to-sell product. This includes operational processes, direct and indirect business relations as well as investment chains. All aspects that might violate human rights including social, trade union and labour law rights, environmental standards and climate goals as well as “good governance” would have to be addressed. This move is to primarily protect affected parties in third countries. These rules apply to all enterprises operating on the EU single market, regardless of their size. After proposals made by the EU Parliament the EU Commission is expected to table a draft in June 2021. Then the EU Parliament, Commission and Council have to agree on a final version in the so-called trilogue. This can be expected next year.

An end to child and forced labour

While according to the German legislative proposals, companies will only have to take action with indirect suppliers if they have received information referring to human rights violations, the EU Parliament takes a more broad-based approach to due diligence. All enterprises are to independently analyse any potential risks along their complete supply chain. This applies not only to their own line of business and direct suppliers but also to subsidiaries and indirect suppliers. Furthermore, an import ban on products associated with forced labour is to be adopted.

In Germany the Due Diligence Act will enter into force from 2023 for enterprises employing in excess of 3,000; one year later it shall also govern companies with over 1,000 employees. The Federal Office of Economics and Export Control will monitor compliance and impose sanctions for breaches.

Fines and delisting to be expected

Although this still seems some time away and most producers of protective wear in Germany do not even reach the company size of 1,000 employees they are indirectly affected. “If small companies cooperate with buyers like major discount stores, for example, they practically adopt the requirements of the big business partner on the back of that cooperation,” says Thomas Lange, General Manager of German Fashion. Apart from that, upcoming legislation generally also exerts pressure on companies, he recognises.

“The planned new legislation concerns everybody, and everybody should take a close look at it,” explains Lange. Even though no new civil law liabilities were established by the German Due Diligence Act affected employees – also from the manufacturing counties – can lodge complaints. The company then has to investigate whether there has been a breach of law at its own business unit or at a suppliers’ place. Injured parties can also obtain NGO support for taking legal action.

Once the legislation has entered into force, fines must be expected. “In Germany the fines are said to be set between EUR 100,000 and 800,000. For companies generating sales over EUR 4 billion the fines are to reach one to two percent of the annual turnover,” says Veronika Ertl. Furthermore, those falling foul of the legislation run the risk of being excluded from public procurement.

The Federal Government intends to help business in the implementation of the Act. The relevant authorities use an electronic reporting format into which existing reporting duties such as CSR reporting are integrated. Moreover, a recognition mechanism is planned for existing certification systems. “Statutory documentation will become more extensive,” explains Lange and adds: “but many companies are already working their way to where the legislation takes us, or they have already achieved this aim.”

This becomes evident in companies such as Bierbaum Proenen. At the Cologne-based manufacturer of protective wear, social and ecological sustainability are part and parcel of the corporate profile. Like other SMEs BP has also maintained long, transparent relations with its suppliers. “Since 2010 we have been a member of the Fair Wear Foundation, since 2019 of Fair Trade,” recounts General Manager Harald Goost and admits that certification required a great deal of efforts. “But”, says Fabian Kusch, responsible for purchasing and sustainability at BP, “we did not have to change anything about our habits for obtaining the symbols – we just had to put the documentation in place.”

On the one side of the equation there were higher costs for organic cotton. On the other side, however, packaging material was reduced which led to savings. On top of this, new customers are recruited who are looking for products “with a clear conscience”. And there is another thing that Goost attaches great importance to: the appeal for job applicants. Young people want to work in companies they can relate to.

Goost and Kusch both agree: Due Diligence legislation will change culture as a whole. They are facing these requirements with equanimity. “Even as smaller and medium sized companies we have to trace back and document the supply chain to the cotton field. But we are already capable of doing this now. We can transparently map all processes right down to our up-up stream suppliers.”

Sustainable help for self help

So as to achieve more faster, BP, Greiff, Kübler Workwear, Weitblick Gottfried Schmidt and fabric producer Klopman International joined forces in 2019 and established the Supporting Fairtrade Cotton Project. This focuses on people at the beginning of the supply chain, those who grow and harvest cotton. For them the cooperation means fairer trading conditions, social change and improvements in environmental protection. To help farmers comply with the strict standards they receive Fairtrade premiums – as help for self-help. These funds can be invested in road building, reforestation or education. “Such projects help create value locally. This is an important goal,” says Ertl.

Bierbaum Proenen welcomes European Due Diligence legislation. “Due to their commitment to sustainability some companies have already operated with higher prices for years. The market is becoming increasingly imbalanced and this is why EU legislation is positive. This also improves the conditions for cooperating with such countries as India, China and Pakistan. After all, these will cause us a headache in the long term if we only have such an act in Germany.”