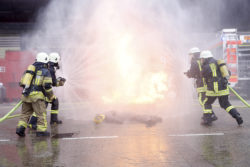 High-quality equipment is important for fire services because this provides the best possible protection when fighting a blaze. Post-deployment hygiene should not be neglected. This is because contamination can lead to considerable health hazards. The A+A as the world’s leading trade fair with congress for safety, security and health at work presents everything revolving around modern protective clothing for firefighters in Düsseldorf from 17 to 20 October 2017.

International studies show that firefighters are at a greater risk of cancer than the average population. A topic that will also be picked up on at the 35th International Congress for Occupational Safety and Occupational Medicine running in parallel with the World’s Leading Fair for Personal Protection, Safety, Security and Health at Work, amongst other things on 19 October 2017 at the event “Krebsrisiko bei der Feuerwehr” (Cancer Risk among Firefighters). It is assumed that the reason for these risks are fumes whose poisonous particles are deposited in protective clothing after fires and which can enter the bodies of emergency personnel through their skins or respiratory organs. “New findings on the dangers of contamination of the most varied kind lead both to uncertainty and, at the same time, rising demands concerning the nature and implementation of care, control and repair,” says Daniel von Chamier, COO at the LHD Group Deutschland GmbH. The manufacturer of protective clothing will this year be presenting itself alongside the product brand LION in Hall 11 at A+A.

“Basically the clothing should be cleaned more regularly but then it also has to be able to withstand this washing,” says Klaus Hawerkamp from the Heinsberg protective wear supplier S-Gard. Washability is extremely important - this is also confirmed by Austrian work and firewear manufacturer Texport presented at A+A 2017, like S-Gard, in Hall 3. “It is the whole package that affects the durability and waterproof seal of the seams just as it does repair suitability,” says Sales Manager Uwe Heinemann summing up. “We have, for a long time already, been intensively involved in emergency hygiene – a topic the fire service will also have to increasingly deal with in the future so as to be able to test and evaluate the solutions offered.”

On the other hand, there is also the issue of stricter European environmental legislation which might ban specific per- und polyfluorised chemicals and thus the impregnated finishes that reduce the soiling of clothing at present. At the same time, soiling that penetrates the fibres making it rather hard to remove represents safety and health risks for the users.

There are different approaches to dealing with the issue of soiling and contamination. Post-deployment firefighters should already remove their outer jackets and trousers at the deployment site and ensure they first remove clothing and then air supply. If it was an intense, very demanding fire they should even shower at the deployment site to prevent any spread of contamination. Another measure is separating black and white clothing. This aims to keep soiled clothing from away from clean areas, such as deployment vehicles and fire stations. However, there are no binding rules and regulations about when and how often fire fighters should have their clothing cleaned.

Despite all the logistical challenges approaches are already emerging where members of fire brigades are offered a change of clothing already at the deployment site. The fire service in the Swedish city of Göteborg has developed another concept. Here the outer fabric of the protective clothing can be separated from the other layers so the firefighter enters the vehicle just wearing insulation lining and membrane.
Furthermore, there is a tendency to purchase two sets of equipment per firefighter which meet different levels of protection. Since on most deployments technical assistance is required such as evacuating an accident site, removing oil or saving the oft cited cat up a tree, less insulating clothing with a flame-retardant outer fabric is usually enough. Berlin fire brigade is already using a two-level approach with heavy-duty equipment for firefighting and a lighter version for technical assistance.

To prevent soiling and any potential accompanying contamination the dark coloured items are on the decline. “There is an increasing switch to pale colours so you can see any soiling,” explains Texport Sales Manager Uwe Heinemann. “Sand tones or gold are being sold more and more frequently in Germany,” echoes Klaus Hawerkamp from S-Gard. This is also due to the increasing proportion of PBI® or Nomex® outer fabrics used. Nevertheless, classic navy is still accounting for the lion’s share of firewear, followed by red. Furthermore, workwear is also having an impact on protective clothing where increasingly two-colour jackets are offered. Orange is now practically out of the picture.

Materials are a very important topic because they contribute considerably to performance and weight. They are becoming ever lighter and more functional. Furthermore, they should be highly tear-resistant and visible thanks to high-vis materials. In view of the debate on soiling, in particular, they need to be easier to wash or withstand regular washing without losing any functionality.

Layering plays an essential role. Moisture must be able to diffuse as quickly as possible to the outside. Because, along with thermal protection, effective moisture management has significant advantages for firefighters. If sweat is quickly transported outwards the risk of heat accumulation and thus the risk of burns is significantly reduced. This gives firefighters more time to react. Furthermore, there is a new generation of reflex stripes that meet EN 469 flame-retardant requirements and which can be washed at 60°C. Their greater breathability also makes for greater wear comfort.

The German guideline for the manufacture and testing of firefighting garments HuPF (Herstellungs- und Prüfungsbeschreibung für eine universelle Feuerwehrschutzbekleidung) is one that is no longer binding on its own anymore in many German federal states. For this reason things have changed somewhat when it comes to design as there is more freedom now. “It has been conceded that padding and pockets reduce breathability. What’s more they add weight,” says S-Gard-Sales Manager Klaus Hawerkamp. Generally, pockets are specially adapted to their function being smaller and adjustable for digital radio or other radio devices. According to Texport, patch pockets are among the trends so as not to reduce freedom of movement and wear comfort. “Every fire service also has different requirements,” explains Uwe Heinemann. Flaps are becoming ever more popular – microphones, gas alarms and the like can also be attached to them and they themselves scarcely weigh anything. In addition to weight appearance is also gaining importance even though protection is and should remain the most important criterion. Demonstrating how fashionable and varied modern work and protective wear is today and that top design and safety are no longer mutually exclusive are the new A+A Fashion Shows in Hall 11.

A special focus at A+A 2017 is the topic of “Zukunft der Arbeit – Arbeiten 4.0” (Future of Work – Work 4.0) that is impressively staged on the new A+A Highlight Route. Across all halls exhibitors showcase highlights on “Smart PPE”, “Digitalisation of Work” and “Digital Applications and Solutions”. With this new concept A+A offers a stage for the future topic of digitalisation which is already taken for granted in many spheres of life. For instance, also in fire protection where networked data will be indispensable in future. This starts with deployment preparation (drawing up of hazard prevention plans), continues with deployment simulation for training purposes as showcased by Mobilion and Haagen for instance at the “Themepark Fire Protection/ Emergency Management” at the stand of the Industrial Fire Protection Association of Germany (Werkfeuerwehrverband Deutschland e.V. – WFVD) in Hall 6 through to deployment at the incident site. Currently it is primarily small changes like the electronic control, for instance of aerial ladders or drones that are already in everyday use.

Nevertheless, when it comes to smart apparel despite many varied projects and feasibility studies also promoted at EU level like Sensprocloths, Smart@Fire or Profitex, no prototype has ever made it to serial production. Devices can convey vital parameters and fire deployment data but they must also be manageable to use. There are still many unanswered questions: How do devices like this function in cellars? Are they washable? Ultimately, how reliable are wearables in everyday use? “We have noticed that many of the previously developed systems that we have integrated into our suits have proven inconvenient and too high-maintenance or impractical in real life. Nevertheless, we have to forge ahead with research with our partners to be able to offer customers a well thought out, safe and practicable system as soon as possible,” explains Christian Pannier, Product Manager at LHD Group Deutschland GmbH in charge of the LION brand. Last year S-Gard in Heinsberg was even awarded the research innovation seal “Innovativ durch Forschung” by the technical association Stifterverband für die Deutsche Wissenschaft e.V. for its commitment to develop sensorial protective clothing and smart clothes.

Knowing where the Hazards Lie

There are a number of challenges that lie ahead in the future. Until a few years ago protective wear for firefighters was regulated down the last detail while now we are spoilt for choice. “20 years ago there were three or four different outer fabrics for protective firewear while now there are over 20,” says Pannier. This means accompanying advice is increasingly important. When purchasing you basically need a risk analysis stating which risks are present, how often firefighters are exposed to them and what the consequences for the wearers are. “All purchasing agents need to study the materials in detail and gather comprehensive information to be able to make the best decision for the protection of their duty officers,” recommends Uwe Heinemann from Texport. “It is only in this way that we can make the best decision.”

However, those responsible can also protect their colleagues by really getting to grips with clothing hygiene. For this there are two A+A exhibitors with relevant ranges. Just recently the LHD Group Deutschland opened another LION TotalCare® Center specialised in the washing and care of firefighters’ clothing. This service in existence since 1989 is therefore now offered in over ten TotalCare® Centers worldwide. Texport has also launched a similar service called Clean & Care which has now firmly established itself on the market.

Alternative washing procedures like CO2 washing are still in development. The Belgian Textile Research Centre Centexbel, for instance, found in a study that CO2 washing reliably and environmentally washes out aromatic carbons, that have been proven to be carcinogenic, as well as carbon-containing substances (PACs) and ones that easily evaporate (VOCs) as well as oil. Using this method significantly better results are achieved than with conventional 60° washing. However, until this is established firefighters are best protected by regularly washing their clothing in the conventional fashion.

Up-to-date details of A+A 2017 and its exhibitors, e.g. suppliers of Protective Clothing for Firefighters, can be found online at: www.aplusa.de.

We would appreciate a sample copy of any reprints.